Hey guys, one quick apology for last week's post. No, it's not that it was overly harsh or contained adult language, I don't give a fuck about language, see what I did there? Seriously though, despite having to now use Microsoft Paint now in order to create my skits, and I can't really help that yet so please bear with me, I'm apologizing because last week's skit just wasn't that funny. It was a rush job and it showed. So, yeah sorry about that. I'll do better next time. Hey, you might laugh, but I think that's pretty damn white of me if I say so myself.

For those that know, DC's next summer event is called Flashpoint. Basically, Prof. Zoom, the Reverse Flash has gone back in time/is messing around with time so much that the DC Universe's will become transformed into another reality. It's already been compared to the X-Men's Age of Apocalypse, so I guess that gives some clue into what to expect this summer. Numerous DC titles gave been cancelled in the name of freeing up writers and artists to work on the 16 mini-series and 4 one-shots. If you haven't already and are interested, I suggest heading over to DCcomics.com and to find images, clips, and interviews with the various writers and artists involved with the project. You can do the same on various other comic news sites like Comicbookresources.com and Newsarama.com.

Now I know, even though Flashpoint hasn't come out yet, there's already a great stink about if you happen to read the message boards. Some if it is warranted when you look at some of the titles that were cancelled to make room for these event mini-series. Titles like Doom Patrol and Freedom Fighters were cancelled, but not some other like Titans and The Outsiders, even if these other titles weren't selling as much as some of the others. I've posted my opinion about this on the message boards or blogs, but that's neither here nor there. I won't cast judgement on Flashpoint just yet, since some of the titles stemming from the even sound pretty interesting, but yes I wish it wasn't at the cost of cancelling DP or a fan-favorite title like that. But, business is business, and at the end of the day DC owns these characters not us. Some of the intriguing titles/concepts I think is:

-Batman running casinos
-Captain Cold as Keystone City's number one hero, despite being a rogue
-Aquaman being a bad-ass and sinking Western Europe then fighting WW
-Cyborg in Superman's role as most popular hero, while Superman is still a kid stuck in a secret lab
-The all-new Secret Seven led by Shade the Changing Man
-Deadman and the Flying Graysons

There's all that and more, so I think there'll be guaranteed something for everyone.

I wrote a little skit about it, and here, here it goes: 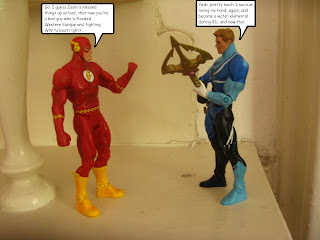 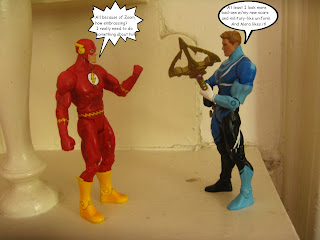 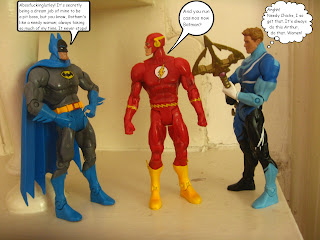 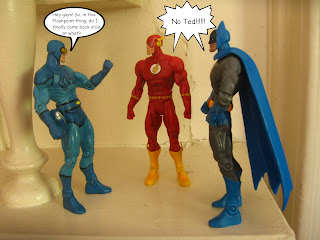 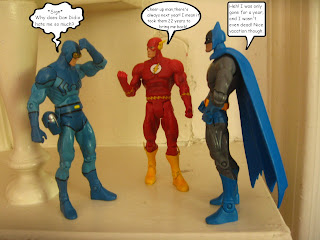 Every time I think of Flashpoint, I think in that timeline, the Doom Patrol should be normal, happy, and famous adventurers. Kind of like the Challengers of the Unknown, except more upbeat. "Being a test pilot/race car driver/actress kicks ass! Whoo! Take that, evil!"

It's also unfair to compare Flashpoint to the Age of Apocalypse, without even seeing it yet; but yeah, I'm doing that. Admittedly, it doesn't seem as wrecked up as AofA...sure, Aquaman tears up Europe, but whatever.

Yeah, I'm reserving judgement on it as well; As I told you, after reading the reviews and some spoilers from the first issue, it looks good so far starting off. That can and probably will change throughout the course of the book. You know Johns; strong beginning, weak/mixed bag ending.

As for DP being happy in Flashpoint, yeah that'd be nice for them for a change, but then why would you want to read that? Drama=interest. Hopefully Johns will find something for them to do, but not screw them up too bad. I guess in the end, it's only an elseworlds tale right?