So I forgot to show off my swag from last Saturday, and then yesterday I drove over to the store and bought the new DC Collectibles Johnny Quick figure. 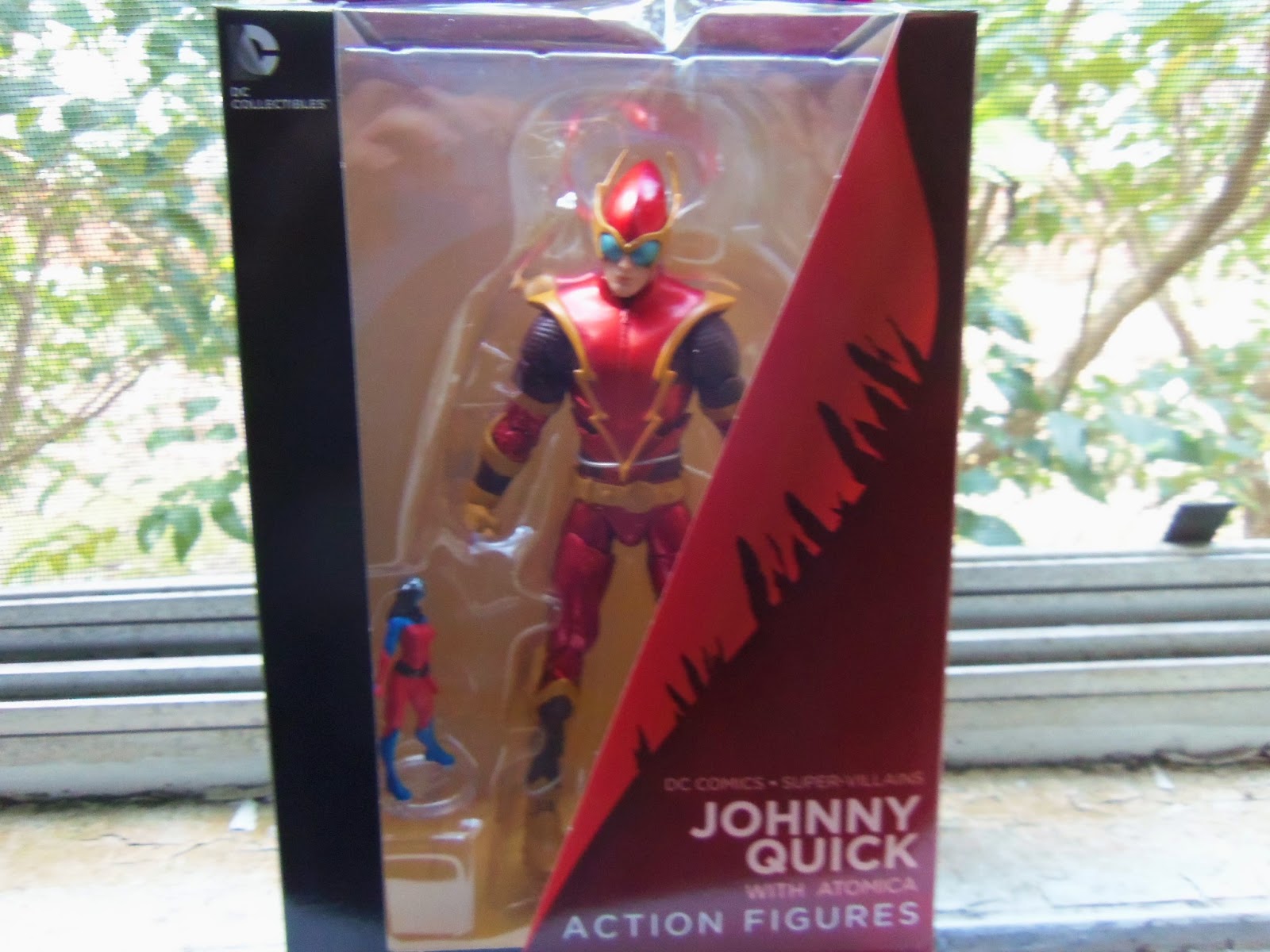 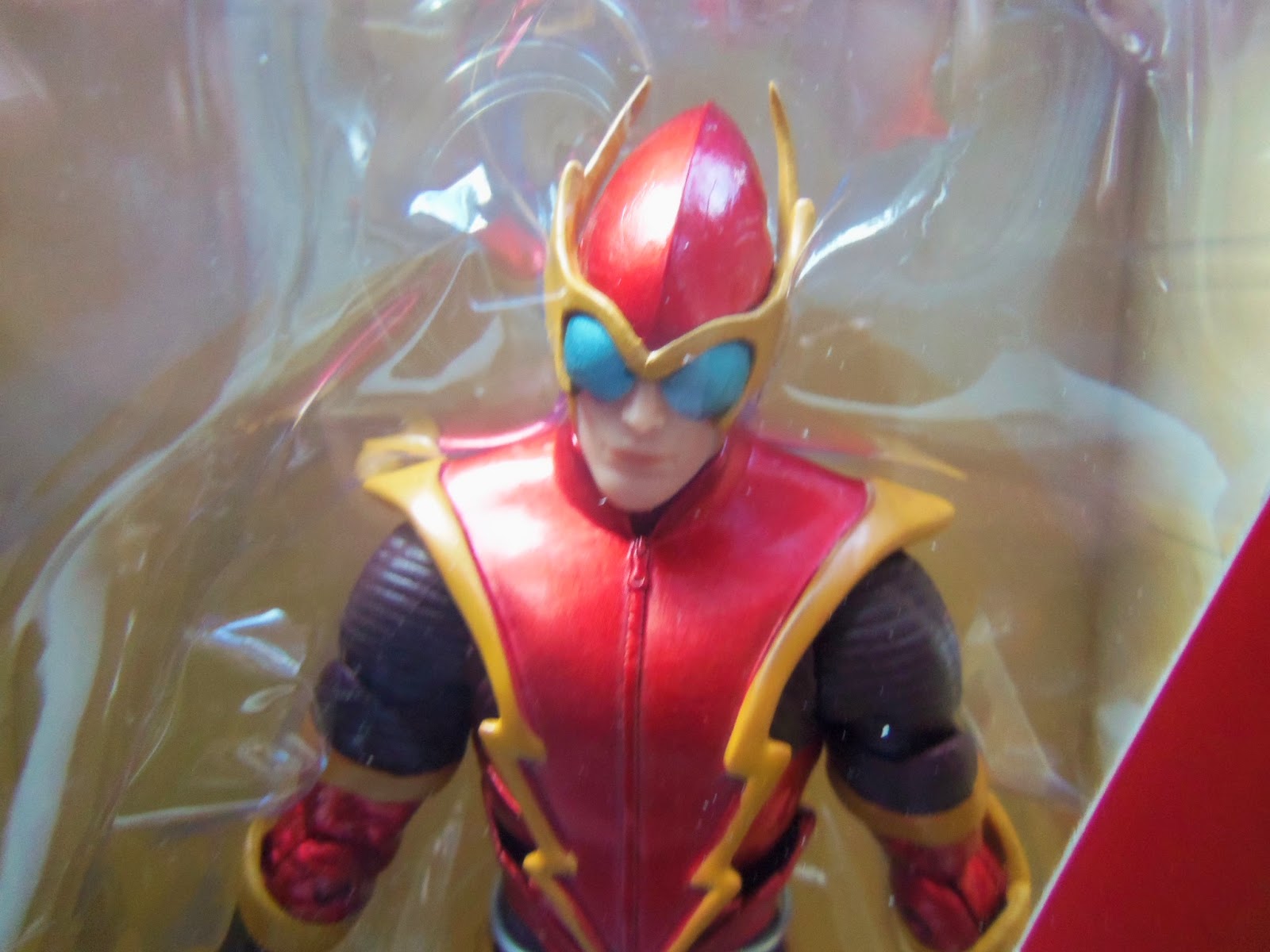 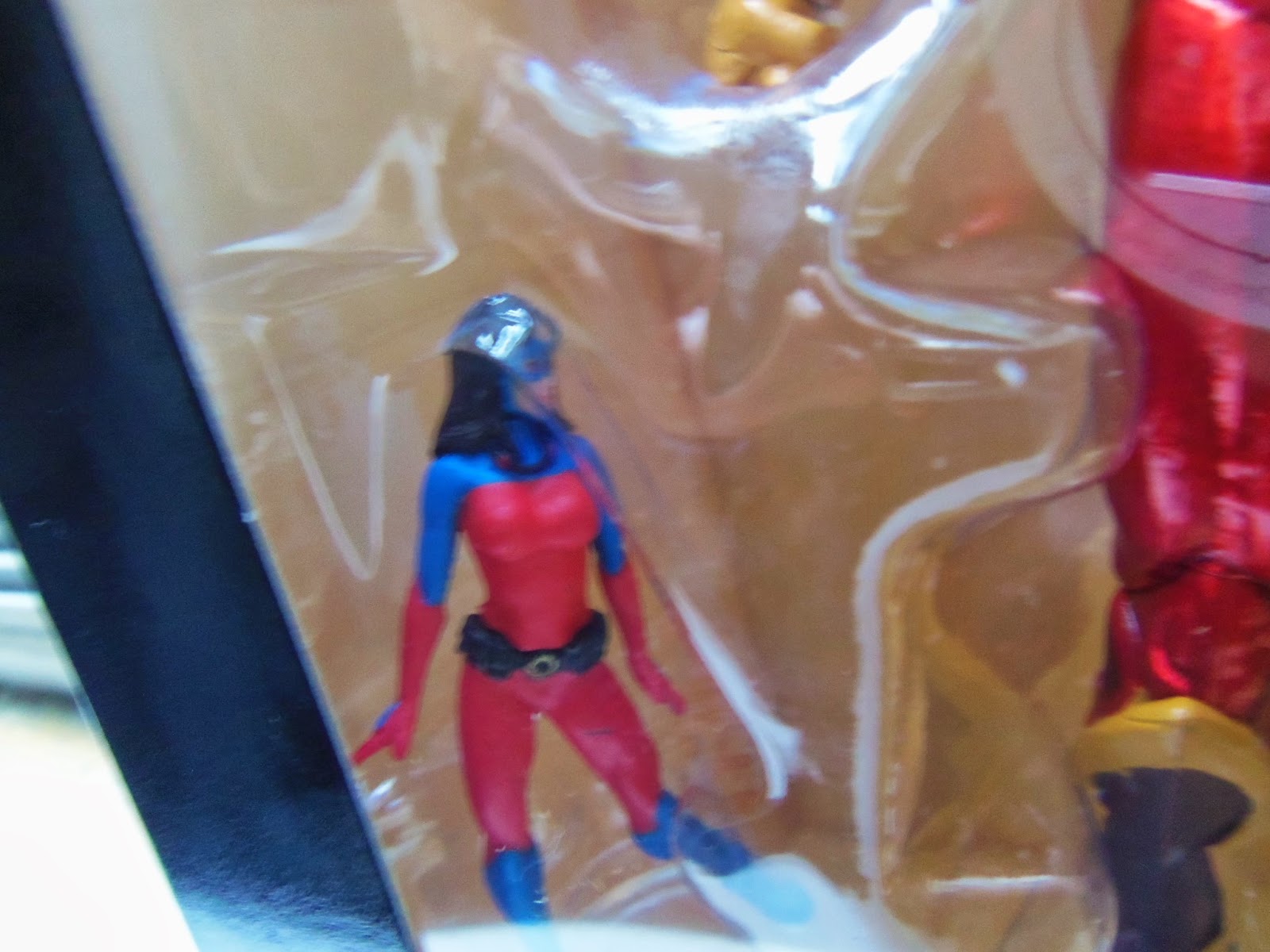 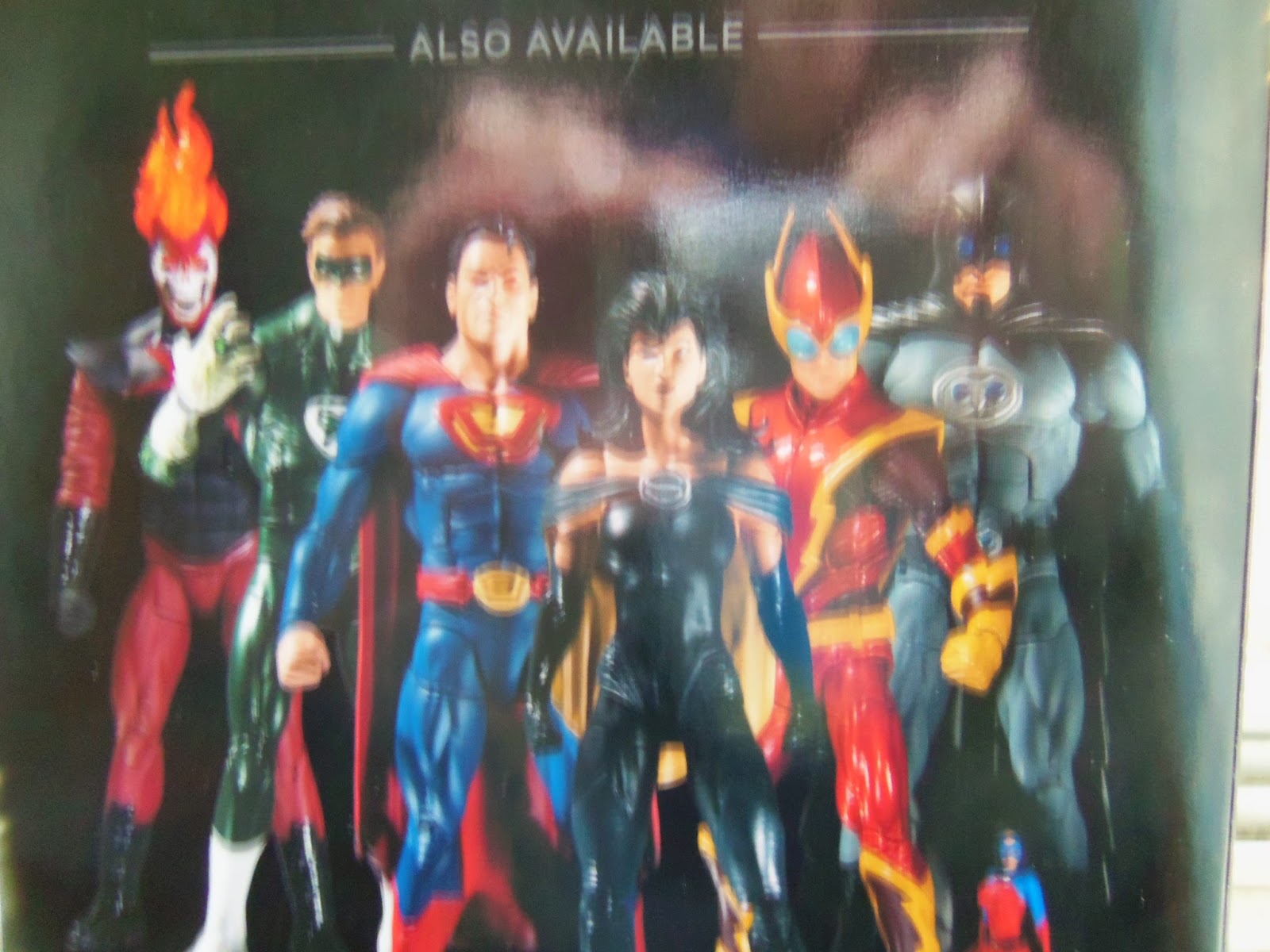 He looks really, really good, and is fairly done well in articulation and overall presentation.

And here's the swag: 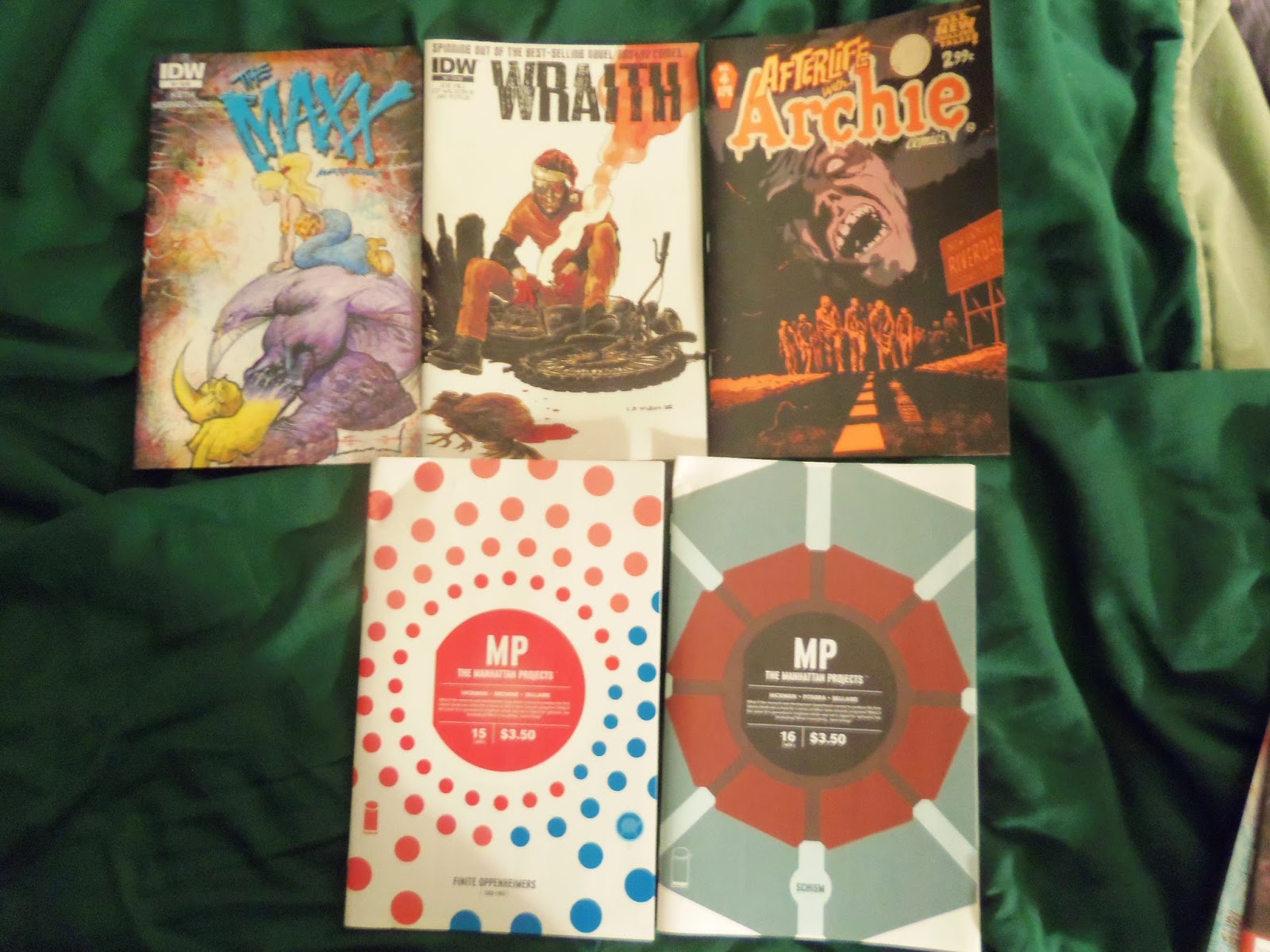 That's the new Maxximized version of The Maxx#2, Wraith#1, Afterlife with Archie#4, and #'s 15 and 16 of Jonathan Hickman's The Manhattan Projects. It's way better than his Avengers' run right now. 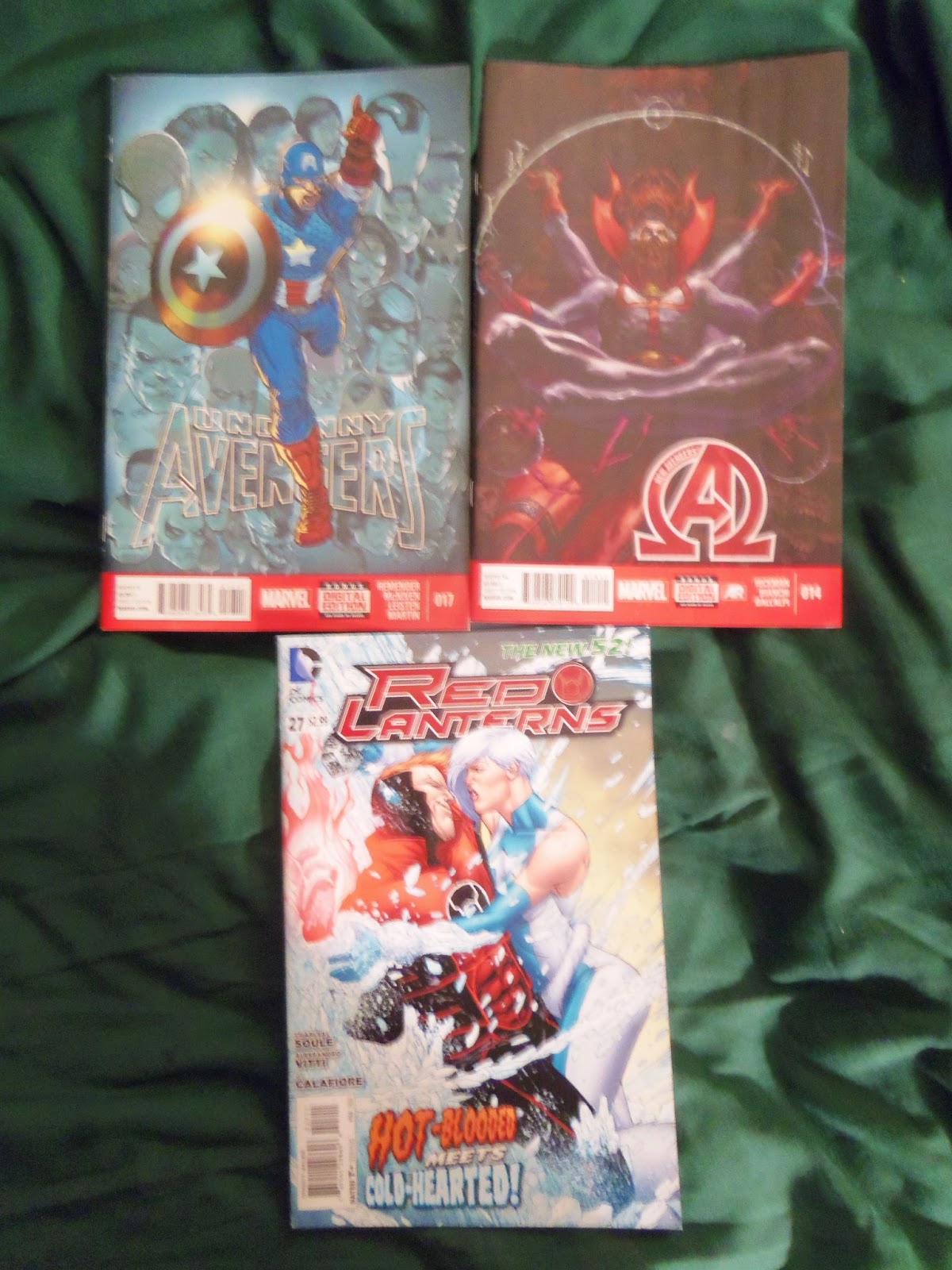 Here's Uncanny Avengers#17, New Avengers#14, and Red Lanterns#27 I'm a sucker for good stories with Guy and Ice, and this one does not disappoint. Love how they sneak in good bits of Pre-NU52 continuity in there. Fuck yeah!


I later bought Deadpool#25, Damien, Son of the Batman#4(Nice ending), and a rare flip book in Green Lantern/Red Lantern#28. This features the full on appearance and dealings of Supergirl as the new Red Lantern. Oddly enough it works for me, and I like her new temp costume. 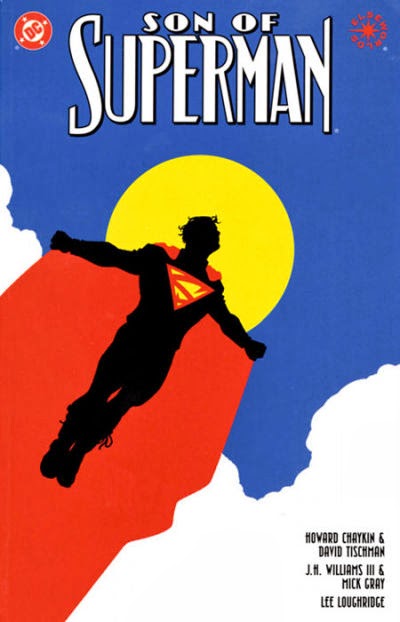 I don't know how much love and attention this one got when it was initially released, but I know I enjoyed it.
It's basically a "What If Superman had a Son" circa 1999.

Meet typical teenager Jon Kent. Or at least he was a typical teenager until these weird and strange powers just started developing out of the blue. Freaked out with no one to talk to about these powers of his, Jon crashes into his house one day, where his mother Lois Lane explains some things to him.
She tells him who his dad is and why she hadn't brought that up before.

Not taking it well, Jon heads out and winds up having to save a nearby motorist. He does, but almost drops the car anyways, until a quick save by Green Lantern. After a quick assessment of the situation, the JLA are suddenly taken out by mysterious guys in suits.

Turns out its Superman's old buddy from Smallville Pete Ross and his wife Lana Lang Ross. 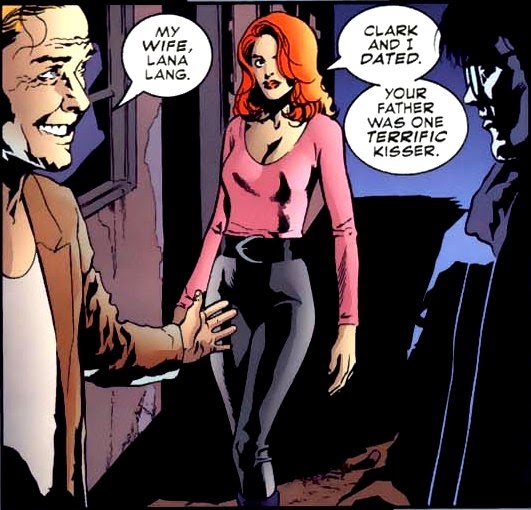 They try and get Jon on their side, claiming the JLA is corrupt as hell and working for Luthor.
Ross convinces Jon to help them go rescue his father in some underground bunker out in the Arizona desert.

The rescue goes off without a hitch, and Ross and Lang apparently get something important extra from the whole deal.


Jon's quickly reunited with his father, as is his mother Lois. 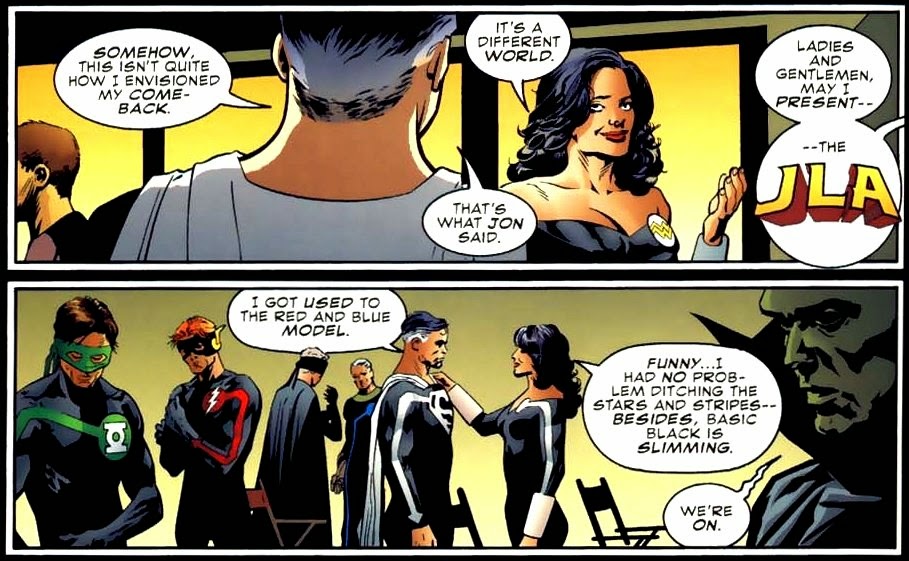 Superman recounts how he was taken out, and promptly rejoins the League. Unfortunately much like Captain America, Superman feels out of times, out of step with the way things currently run within the League. And yes, basically the JLA are corrupt sell-outs. They've sold out and gotten rich, and plan on keeping it that way.

Superman comes to the realization that Luthor's indeed behind everything and heads to his home away from home, the Fortress of Solitude. 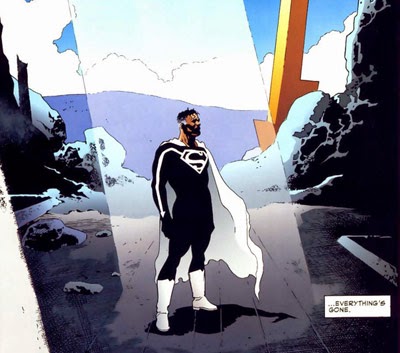 Guess figured out how to get around that pesky giant key/lock problem.

Luthor's been getting rich off stealing alien technology from the fortress, and now Superman's really pissed.
Superman recruits batman(of course) and his son to take down the rest of the Leaguers. Said league is comprised of Flash, Green Lantern, Martian Manhunter, Aquaman, and Wonder Woman.
Yeah, good luck Supes. 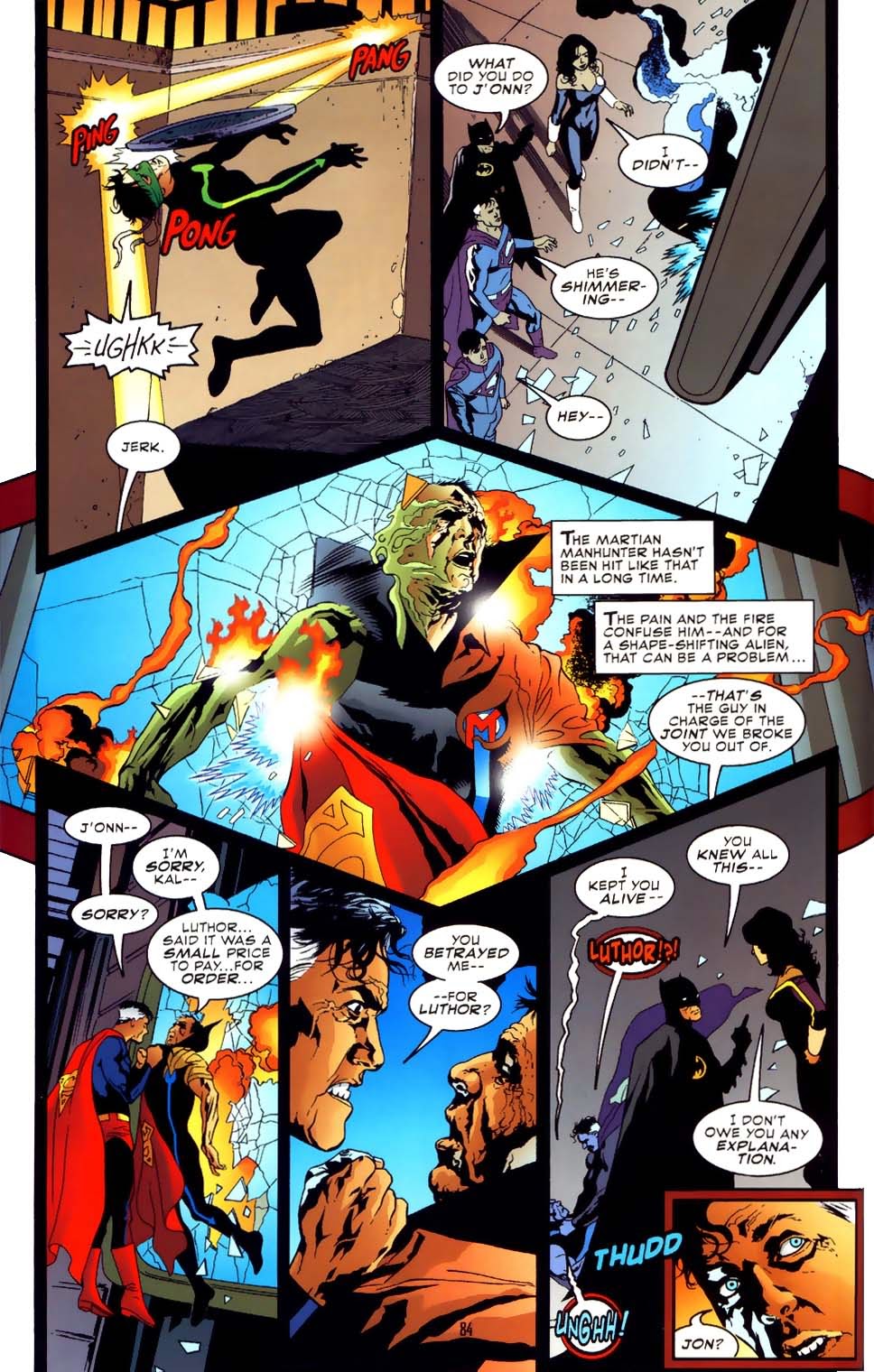 WW joins with Team Superman before the throw-down goes down. The main battle is Superman vs. an uncharacteristically selfish and greedy person. His big gripe over the years has always been that Superman was loved more than him because he looked human, not alien. 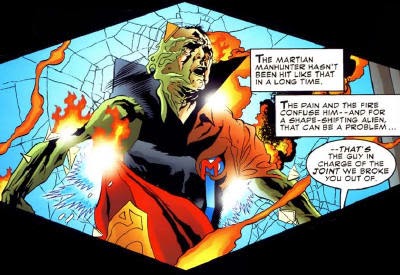 Much like how Superman was taken out to begin with, this sudden reveal is just horrible and so unrealistic as concerning the characters. It's all just flimsy excuses to make these characters act and say things they wouldn't normally say and do, and that's weak sauce man. The execution's fine don't get me wrong; it's just the reasonings require an extreme amount of disbelief to work. And these aren't newbie writers; they're industry legends and professionals.

Batman decides to run for President, GL, Flash, and MM are jailed, while Aquaman gets deported, Diplomatic Immunity I think.

Meanwhile Lois and Clark plan on adjusting to Clark being back, and living out the rest of their lives together. 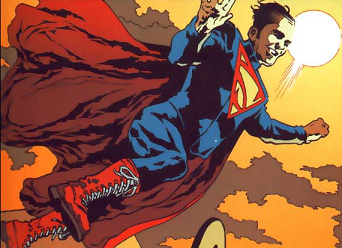 Jon of course becomes the new Superman.
Shocker I'm sure;)

Overall, not a bad story indeed. It;s just how they get their is kinda' wonky. Neat inside tidbits and easter eggs if you can find em'.
Plus how could you not love J.H. Williams? Hard to believe he wasn't quite so in demand like he is now.
He was fresh off the cult hit Chase at the time, getting work where he could find it. Solid work here though nonetheless, even if his Prometha and Batgirl art are far superior.

St. Pat's is this weekend, so I'm off this Saturday to party with some friends in Charlotte.
Can't fucking wait to pub crawl and get fucking wasted,
Might even lose my phone again. Hey, you watch, it'll happen. Aww shit, jinxed myself. Fuck!

Anyhoo, I hope you all have a likewise awesome fucking weekend.
Live, love, and lose yo got damn mind;)
- March 13, 2014

The King of Thessaly said...

Nice figure! He stay in the packaging? I like the little Atomica he comes with too! But looking at the back- no GRID figure, though? What about already dead Sea King???
*is jealous of your sweet The Maxx comic*
That's funny- man... I was just reading the ElseWorlds mini Thrillkiller by Howard Chaykin last night. Something from it will be up next week.
But I've never read this book. ElseWorlds are always pretty definitively hit or miss.
Thanks for sharing!

Reading the post reminds me of the Justice League from Batman Beyond's world. Don't know if you guys remember the call 2 part episode; damn good writing.

Atomica should have gotten a fully articulated 6inch and her little small self. She's a real good character, hope she stays around since her boyfriend has gotten his leg frozen and kicked off by Captain Cold.

Nice pick! I never got that book so was a good time read the rundown - I had the cover as a poster for a while. Man I miss Elseworlds... so many great stories.

Manhattan Projects is brilliant stuff huh? I jumped on that at debut due to Hickman's FF, and while it gets a bit sciencey in parts it still twists the bejeebers outta ya :)

@King: No, no he did not. not for long at all. He's just so cool. With the exception of Owlman(I just don't dig his new redesign) I want the rest of the Syndikate myself.

I wish they'd make a Dead Sea King too King. Man I hope they do soon.

Thrillkiller is really, really good. As is Chaykin's take on Batman during the nazi years. Like I said, this one's solid enough, it's just some of the rationale that doesn't make sense to me on how they got there.

@Omega: Yeah she really is a solid character too. Interesting origin for both really.
I don't know at all about the fates of the Syndikate members. I imagine one or two might live, but the rest gets killed off/replaced. Who knows.

@Dan: I'm actually really digging the shit out of Manhattan Projects. It's creepy as fuck, which helps due to the art style. Reminds me of another Image series I enjoy due to the weird and creepy art/story; Bullets and Coffins.