So alas, here we come to the end of my work week. Sorry to all you other poor bastards that can't say the same. I feel ya'.

Well cheer up, because St.Patrick's Day is this weekend, and you'll have plenty of opportunities for fun and hangovers!

I probably should've done something special to mark the occasion as I've done in the past, but frankly I didn't think of it sooner, and I'm lazy.


So, today's randomly picked back issue to spotlighted today is Avengers(Vol.3)#76 February, 2004. 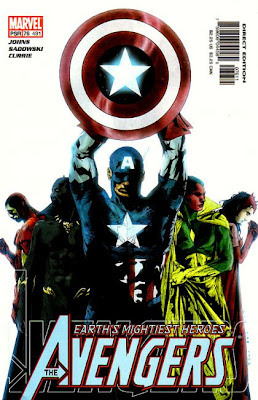 This one's from the very brief fun by geek god and Dan Didio's favorite writer, Geoff Johns.
Yes, you read that right, Geoff Johns actually did write The Avengers once upon a time. Sure it didn't last longer than a cup of coffee, but it wasn't terrible.

Well today's issue revolves around the bickering (then) teammates Ant-Man Scott Lang and Jack of Hearts.

Ant-Man's pissed because he lost custody of his daughter Cassie to her mother due to his duties as an Avenger. Although to be fair he wasn't a full-time Avenger at the time. A point he makes to the judge, but that still doesn't sway the judge despite the acknowledgement of said point.

Jack of Hearts is pissed, because he's forced to stay in heavily armored bunker underneath Avengers mansion because the energies that power his body are slowly killing him and and cause him to explode due to his half-alien physiology.

So you have those factors causing these men to already be in shitty moods, take it out on each other. Of course it doesn't help that they're personalities already rub each other the wrong. You know how it is; you have a co-worker that you absolutely can't stand but are forced to deal with because it's work, and you need the income that job provides, so you do your best to suck it up and get through the work day. Well same the principal applies here, except their jobs is to protect the world from super-powered threats and the like. 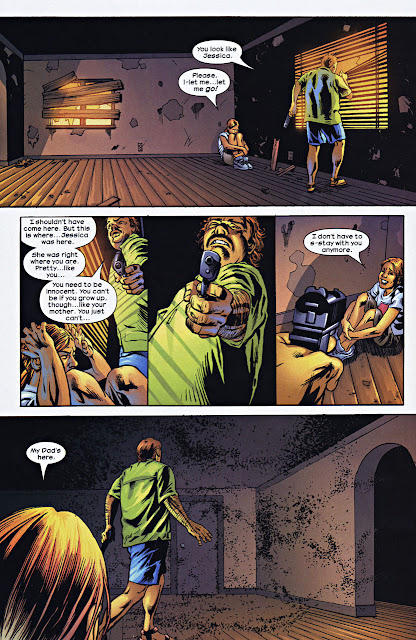 Well things get worse for both men, as Ant-Man's daughter  Cassie is abducted from school by a man claiming he needs her help finding his missing daughter Jessica. It's all a ruse, and pretty quickly he's pulling a gun on her, intending to kill her like he did his own daughter, the same one one he claimed was missing.

Ant-Man goes after the both of them and finds them fairly quickly with his powers. 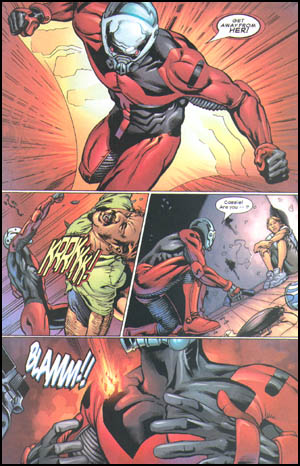 Ant-Man and the psycho father battle it out, with Ant-Man winning. He then points the man's gun at him, just in time for Jack of Hearts to show up and stop Lang from shooting the man right in front of Cassie. 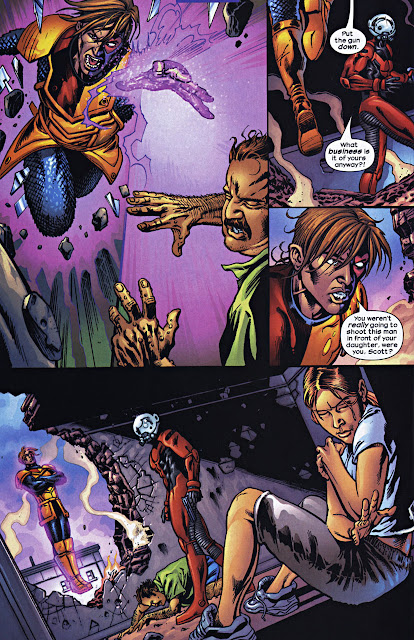 Jack of Hearts by this time, is tired of being locked up in the vault all the day, waiting for a cure. He's of the mindset that it's probably better to just go ahead and die free than live like a prisoner. He then decides to take the psycho dad with him into outer space right as Jack starts to breakdown and explode. 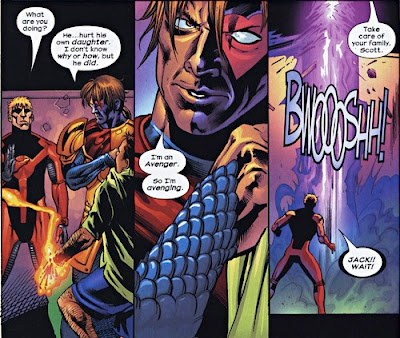 And that's exactly what happens. 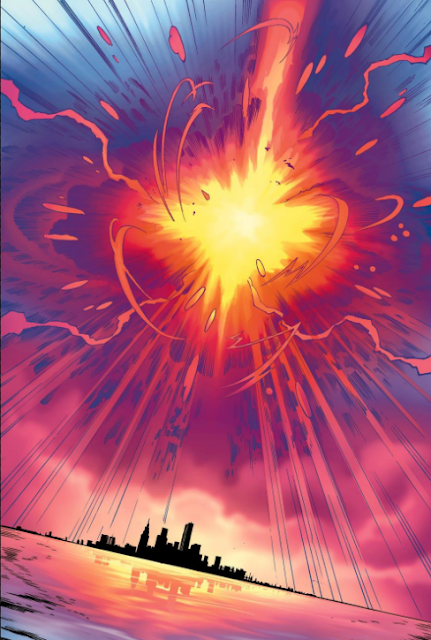 A sad but good death for Jack, and a really good emotional ending. But really, Johns didn't need to kill Jack off. Sure it packed that much an emotional punch, but was totally unnecessary.

If I'm not mistaken, Johns ended his run here, and went back or stayed @ DC, where he of course, remains to this day.

While not bad, I'd still be interested to see what he could do with The Avengers again, as well as many other Marvel mainstays such as Spider-Man, the FF, X-Men, or even the Hulk.

That'll do it for me for this week. I'll be partying my ass off for St. Pats, and staying with some friends until Wednesday. So I might make any new posts until then. Or I could always schedule them out in advance. I don't know. You guys can wait right? Of course you can;)

Anyhoo, have a damn good weekend and an kick-ass St. Pats people!!!!
Drink responsibly and drive safe out there........

Email ThisBlogThis!Share to TwitterShare to FacebookShare to Pinterest
Labels: Back Issue Spotlight, Jack of Hearts gets no respect, The Avengers

Thanks for the synopsis, Dale. I never read that one, and boy, is it a gut puncher. You're right, there really wasn't a reason to kill off Jack of Hearts, except for the emotional sock it made to the end of the story. I guess they thought that was enough. It's a pretty deep hole they wrote themselves into, with his decaying powers. I refuse to believe SOMEONE couldn't have come up with something unlame to get him out of it though.

Have fun this weekend. :) Don't get into too much trouble. Just enough to thoroughly enjoy yourself. And always make sure you can crawl out of the Floyd hole.

I have this issue. I had to get it for the cover. Geoff did alright on the Avengers and definitely restored the She Hulk Hawkeye relationship to the good ol times.

@Random, yeah, I mean as smart as Tony was, not to mention Pym and Reed Richards, and they all conveniently couldn't help him out. Bullshit.

I remember when Jack appeared in Silver Surfer#76-78, and he had the same problem. It was wrapped up and solved by 78, where he hot a new suit/costume to help contain those energies. Now I know Johns wrote it that the new suit didn't work anymore, but that was just for the sake of story convenience.

But whatever. Still a good story, and not a bad ender, even though it still wasn't that necessary to kill poor Jack off.(ha ha, I said Jack off;)

I didn't mention it, but yeah he really did. I have the "Hunt for She-Hulk" issues, and they're really good. Who didn't cheer for Hawkeye showing up at the end of the first part?;)

Plus that beautiful Scott Kolins art.....

I hope you have a kick-ass weekend yourself there Dan-O. I don't know if you crazy Aussies celebrate St. pats, but I'll be sure to drink a shot and raise a glass to ya' anyways;)

Isn't every day St. Pat's day for them?

hey Dale that was a good read i'll be on the look out for that issue in those dollar bins. i always wondered how exactly he died. plus i like his updated costume. i think the less intricate design and the "unhooded" look works better. i think this might be worth posting on the ROM blog : )

I gave up on the Avengers book for several years and picked up this issue as a reprint, in the Marvel UK Avengers series. Must say I found it boring - Lang never interested me at the best of times and this custody thing got boring real fast; dont get me started on Jack Of Hearts. You can almost see Bendis champing at the bit to get on the book and start 'disssaembling' it.

@Shlomo: Thanks for the free plug brother. Never get tired of those;)

@Karl: I can see where I might find this stuff borning, as it does seem like the typical soap opera stuff plot-point. Still I really think this was a good story overall; You have these two guys that can't stand each other both having shitty days, and then some psycho comes along and really messes up both their days. Again, Jack didn't really have to die, it did give the story an extra punch.

By the way Karl, have you read the new Marvel Now FF title then, where Scott Lang's the leader? I liked him in his brief run with the FF back in the 90's so it seems to be a good fit here.

Thanks for stopping by though man. Appreciate it;)

Yeah Dale Im a MASSIVE FF fan - always have been all my life. Fantastic Four is my all-time fave book, after LSH.
I buy anything and everything FF associated, Im that in love with them!
I cant say Scott is a fave of mine tho, particularly as a] he tried it on with Sue Richards when her hubby was presumed dead and b] theres really no need for a second Ant-Man when we still have Hank Pym around. Oh well!