Why does Alex Ross hate me?

Well Heather(my fiancee') and I survived the St.Pat's Festival Saturday. We had a great time all-around, both of us noting how we normally didn't drink that early in the day. To get alittle perspective on that last statement, we arrived in Columbia around alittle after 12pm, and started drinking around 12:25. We split a 24oz Bud Light and presumed to get our drunk on. Which we did. By the time we left, she got a headache, and we both wound up with slight sun burns. Ouch!
Still had a good time though, and am truly glad we went.

Alright, now the main topic of today's blog is a brief  discussion about how and maybe why, Alex Ross hates/dosen't like Firestorm so much. Now more than likely if you didn't know about the beef between Alex Ross and Firestorm, then you might enjoy this little piece, if you already knew about this, then you know where I'm going with all this. 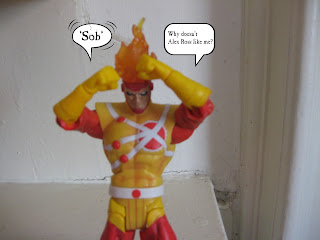 Now in doing research for this little article, I had yet to come across an official interview with Ross specifically stating any distain for ol' Ronnie, and I have yet to find any. So if you find any, feel free to send 'em my way. In any event I give you a few reasons why it seems Ross doesn't like Firestorm:
1). Outside of the cover Ross painted to the new hardcover edition of Crisis On Infinite Earths, there's no Alex Ross Firestorm artwork around. And yes comic fans, Firestorm is in there. Go read it to find out why. 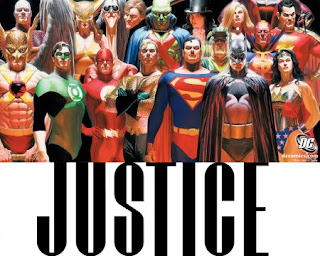 2). Ross clearly loves the Satelite-era JLA, but in any story Ross's been involved in, there's no Firestorm! 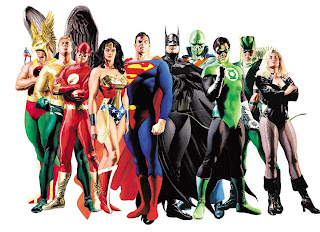 Check it out for yourself. Look up Paul Dini/Alex Ross' Liberty and Justice hardcover. No Firestorm there. Next, howabout Jim Kruger/Alex Ross' Justice Limted-series. No Firestorm there either!  Some have claimed that Ross' is trying to re-write DC history but not including Firestorm with the other traditional statelite-era Leaguers like Elongated Man and Red Tornado. How he even includes Plastic Man in this group, dispite the fact PM didn't join until Morrison's run in the late 90's. I don't get it either, but the proof's in the artwork.
﻿
So why all the hate towards good 'ol Ronnie?  He has cool powers that made him both invaluable and unique as a JLA member, and he even appeared with the animated JLA in the 80's in the much beloved Super Powers cartoon. Yeah there were some duds in Apache Chief, El Dorado, and the Wonder Twins, but yet Alex Ross shows them love.
Hell, Firestorm's experiencing a resurgence in popularity with the whole Brightest Day saga going on right now, so I'm at a loss as to why Alex Ross disses Flame-head. I guess when you're the main creative force on a book, you can do what you like, but blatantly re-writing history by ignorning a character thats involved with a popular team in arguably their most iconic line-up, is just a little messed in my book. How much say DC had or didn't have in this little matter isn't quite known. But I figure this little issue had to raise some eyebrows, as it certainly did with a number of vocal fans.
Now that's not all to say that I have a low opinion of Alex Ross. I don't. In fact he's one of my favorite artists of all time, not to mention a hell of an idea man and storyteller. I just don't get the hate or dislike of Firestorm.
Sure you're not going like every character in a comic book company's stable. You're just not. Still though.....
And before you start to think I'm biased and secretly running a fan club for Firestorm, I'm not. My introduction to this character started in the late 80's for me. I was living in West Germany at the time, as my dad was in the military, so my family and I lived between two army bases. Anyhow, on a trip to a thrift store I found and got on the cheap, a bag of action figures. In it, were Firestorm, Brainiac, Lex Luthor, and Dr.Fate of the Super Powers toy line. I didn't know all their names back then. That would be latter.  I had those toys for a number of years, only recently selling  the Firestorm, Martian Manhunter, and Red Tornado toys I had left from that line. Anybody who owned these toys were no doubt cool, and who also probably enjoyed the hell out of these figures, as they were at the time, the best thing to come out action figure-wise since Mego.
Back to the topic though,  Firestorm proved popular enough to be featured in at least two separate articles in Wizard megazine that I know of; the first gave him a #9 ranking in the "Top Ten Toughest" feature above the Hulk, in Wizard#70(June 1997). The second, was in a JLA special recounting Fury of Firestorm#4, where Firestorm is forced to fight his JLA teammates. He does a good enough job of keeping them busy, like creating a force bubble out of Kryptonite for Superman.
Like I said earlier, Ronnie's currently featured in the Brightest Day limited-series, and has been brought fully back to life after being killed off in Brad Meltzer's Identity Crisis story. I myself don't see why he had to die, as his death didn't really serve any purpose to the story other than to show how dark things had gotten up to that point I guess. As if the rape of Sue Dibny didn't tell you already.
In any event, he's back and as popular as ever; much to Alex Ross' chagrin I think.
Man, I wish I had that Dr.Fate toy! If only my destructive side hadn't won out over my rational side and I hadn't bashed him to pieces with a rock. Yes folks, I used to be a pretty destructive kid when I was little. Oh well.
- March 21, 2011

I was looking forward to this one! I'm usually a fan of Ross, too. The only explanation I've heard--and this is off the top of my head, so I could be wrong--is that Ross sees Firestorm's entrance into the JLA, as the end of the satellite era and his personal golden age of comics.

Still, I don't mind Firestorm, even if he is ridiculously overpowered in a lot of stories.

I really don't get the Firestorm hate from Ross myself. I know everyone has their favorite and least favorite character, especially where the JLA is involved;Especially what member. I myself can't stand Apache Chief, El Dorado, or even Samurai(they could have just used Red Tornado instead) but don't mind Black Vulcan, even though they could've just as easily used Black Lightning instead. Still, that doesn't mean I'd try to "forget" they didn't exist, and skip over a very glaring omission in Firestorm. In the end I guess the point is moot since DC obviously didn't have an issue with the whole thing.

Hey Dale! You're not the only one wondering if Alex Ross hates Firestorm!
http://firestormfan.com/2015/03/17/alex-ross/